Like many women, I love Hobby Lobby. What’s better than a store that has every crafting tool invented, constantly has at least 30% of their store on sale and always has a 40% off any regular-priced item coupon available?

This last weekend’s trip to Hobby Lobby did have a specific purpose – and we actually stuck to it (only buying 1 item that wasn’t related to the project I had in mind).

I’ve been seeing posts of DIY boutonnieres all over Pinterest, and while the project looked like it could turn into a sticky disaster, I thought it looked fun and I wanted to see what would happen if I gave it a try.

I knew my trip to Hobby Lobby wasn’t in vain when Jason and I found the EXACT feathers I was thinking of (funky orange and tan) along with all the other supplies I needed (corsage pins and floral tape) for only $27! (I was quoted $65 for 8 of the local florists “grab and go” boutonnieres) That meant that if I was able to actually pull this off, we would have something totally custom for less than half of what the blah, standard boutonnieres would cost us.

When we got home, I was really surprised to see how many feathers came off of each bundle ($4 each) I had purchased, so I stopped after only 2 in case I could return some of the other ones (and save even more of that wedding budget). 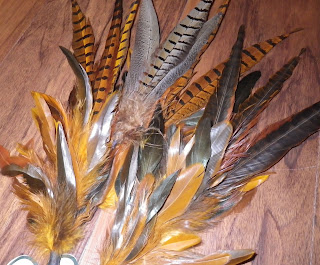 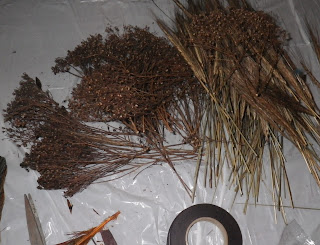 I then basically just started putting different feathers, wheat and baby’s breath together; wrapping the ends in the floral tape once I had something I liked. I made sure that Jason’s had the most orange in it (since I want the him to stand out AND it’s his favorite color) and then I used the tan feathers for the ones for our grandpa’s and Jason’s dad to give it a more mature look. 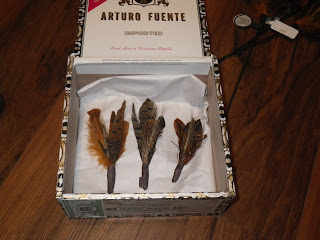 In the end I was left with 3 orange and 1 tan feather bundle left, which I’ve decided to keep in case I can make some cute hair pieces for the bridesmaids to match the boutenneirs or something like that. So not including the extra feathers, all 8 boutenneirs cost me $13 to make and I think that’s pretty awesome!

As a side note, Jason and I realized that we probably have a natural inclination for things with the above colors because of a certain furry one that thinks she's the queen of our household ;) 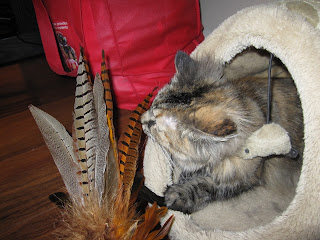 Posted by The New Mrs. Mincey at 6:21 PM
Email ThisBlogThis!Share to TwitterShare to FacebookShare to Pinterest

Looking for Some Inspiration?